As you’re getting ready to turn that calendar to a new year, grab your pen and start making plans to check out some new attractions and activities in North Dakota! 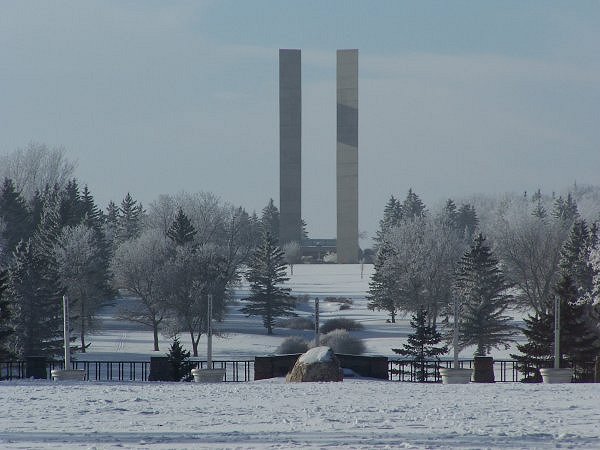 The International Peace Garden in the Turtle Mountains is known for its beauty, tranquility and symbolism. It’s a popular destination in the summer and now travelers can enjoy it in the winter. The Peace Garden has an extensive network of trails accessible for snowshoeing.  Snowshoes, walking poles and bindings can be rented from the interpretive center.  The interpretive center and conservatory are open year round.

The Theodore Roosevelt Center at Dickinson State University is dedicated to preserving the legacy of America’s 26th President. A new presidential digital library gives scholars and visitors a new way to be inspired by Roosevelt.  Visit online or in-person – but be sure to package your visit with Theodore Roosevelt National Park.

Always wanted to fish the Missouri River in the winter but your boat is stored away? No problem. Sakakawea Guide Service now offers unique houseboats with an opportunity to fish the Garrison Dam tailrace throughout the winter months.

The Lewis and Clark Interpretive Center expansion is slated to be open in February showcasing a new event center, library and production studio. More exhibits tell the story of the Corps of Discovery and others who journeyed through (now) North Dakota.  The Center is located in Washburn.

Also scheduled to be open in February is the new Enchanted Castle, a 20-room lodging facility in Regent – known as one stop along the Enchanted Highway. The front of the new hotel will have the appearance of a castle. Walk across the moat to enter the property.

Posted by legendarynd on December 28, 2011 in Attractions, ND in the News, North Dakota Buzz

Two-hundred-seven (207) years ago today, the Lewis and Clark Expedition crossed into what is now North Dakota.  During their time, it was known as the Upper Missouri, or the Great Bend of the Missouri, or Upper Louisiana.   For Lewis and Clark, North Dakota was the transition zone between the familiar and the unfamiliar, between lands that had already been mapped, named and described and terra incognita.

They hadn’t originally planned to winter with the 4,500 Mandan and Hidatsa Indians of the Knife River earthlodge villages.  Clark planned to get as far as the “Rock mountains” before winter and Lewis expressed uncertainty about where they would stop.  But when the captains began to notice ice forming on their rowing oars and experienced their first northern plains snowfall on October 21, 1804, they realized that they must soon establish winter quarters.  Five days later, they made their first substantial contact with the Mandan Indians, who had a reputation for being friendly to visitors.  And they ended up staying 197 days on that outward journey.

North Dakota continues to have a welcoming and friendly reputation.  In fact, Cambridge University called North Dakota the most friendly state to visit.  And here, the Lewis & Clark story can be discovered by modern explorers.

A reconstructed Fort Mandan is a full-size replica refurbished in the era.  (The original fort burned down sometime before the expedition’s return voyage in 1806.)

The Lewis and Clark Interpretive Center in Washburn is the comprehensive stop to learn, see and experience the Corps of Discovery.  These sites are open year-round and winter events at Fort Mandan mean you can step back into the period when Lewis and Clark walked the same trails.

Details of the Lewis and Clark Expedition in North Dakota can be found in the book, A Vast and Open Plain, written by Clay Jenkinson.

Posted by legendarynd on October 14, 2011 in Attractions, History

Wondering about flooding in North Dakota? We’ve got the answers

The Medora Musical opens its season June 10 and will be performed nightly through September 10.

As seen in the U.S. and around the world this year, Mother Nature has been unleashing some wacky weather.  Some of that has affected North Dakota due to heavy rains and mountain snowpack melt-off.  The state has been experiencing flooding in a few areas of the state and the North Dakota Tourism Division wants to make sure you have the most current information available when planning your trip or traveling our great state.

First of all – here are some go-to resources to help with your planning and navigation:

Here’s a quick update on some of the places we’re being most frequently asked about:

For a full listing, please see our latest press release.

It’s also been reported that Amtrak has restored service in North Dakota.

We want you to fully enjoy your North Dakota vacation.  So please just plan ahead, be prepared and have a great time! Then be sure to tell us about it at www.RULegendary.com – we’re giving away weekly prizes to hear your vacation stories (and see the pictures and videos too).

Posted by legendarynd on June 15, 2011 in Attractions, Entertainment, ND in the News

Sometimes when people travel, you’ll hear them talk about immersing themselves in the culture.  Or that they might even be taking a cultural vacation.  In fact, one of the top travel trends in the U.S. is “history and culture” vacations.  But what does that mean?  And could you even be doing it without knowing?

The types of culture found in North Dakota is far ranging and includes celebrations of immigrant cultures, like the Ukrainian Festival in Dickinson (July 22-24), the Deuce of August Icelandic Celebration in Mountain (July 29-31) and North America’s largest Scandinavian Festival, Norsk Hostfest in Minot (September 27-October 1).

There are celebrations of western culture, like the  Taylor Horsefest (July 29-30), the Wild West Shootouts at the Frontier Village in Jamestown and Tatanka Festival (July 7-10) and the popular Medora Musical (nightly June 10-September 10).

And if you’re looking for history, you’ve visited the right place.  North Dakota is where legends were made and you can follow the Trail of Lewis & Clark, visit Theodore Roosevelt’s cabin in a national park named for him, see the home of Sakakawea, the fort of General Custer, the headdress of Sitting Bull, a museum dedicated to Roger Maris and even the birthplace of Lawrence Welk.

You are invited to visit, explore and enjoy North Dakota’s history and culture.  From one of the oldest standing structures built by immigrants to a botanical garden commemorating international peace – there’s a diverse and fun trail waiting for you in North Dakota.

Posted by legendarynd on May 24, 2011 in Attractions, Entertainment, Events, History

Saluting Sakakawea today (and every day)

March is Women’s History Month and today is International Women’s Day.  Arguably one of the most inspiring and influential women in North Dakota’s history is none other than the interpreter and guide Sakakawea who accompanied Lewis & Clark on the Corps of Discovery to the Pacific Ocean.

Sakakawea’s fascinating history can be explored at the North Dakota Heritage Center – the largest museum in the state, located in the Capitol city of Bismarck.  An online exhibit dedicated to Sakakawea is place to whet your appetite.

One of the foremost authorities on Sakakawea, Clay Jenkinson, writes about her in the book “A Vast and Open Plain.”  Jenkinson details what is known about this American Indian icon.  She was probably born among the Shoshone Indians around 1787.  She was captured at about the age of 11.  She spent the next five or six years among the Hidatsas and by the time Lewis and Clark arrived in late October 1804, she was one of the wives of French-Canadian trader Toussaint Charbonneau.

Jenkinson writes that it is certain Sakakawea joined the expedition primarily to interpret among the Shoshones, and her value must have been considerable because she made the immense journey to the Pacific Coast and back again to the Hidatsa villages carrying her infant child, Jean Baptiste Charbonneau.

Today on International Women’s Day, we salute this pioneering woman who truly is Legendary.  Follow in her footsteps along the Lewis & Clark Trail in North Dakota and even enjoying one of the nation’s largest man-made lakes, named in her honor – Lake Sakakawea.

Posted by legendarynd on March 8, 2011 in Events, History

Sakakawea statue at the entrance to the North Dakota Heritage Center. Photo by Sharon Silengo

On the North Dakota State Capitol grounds in Bismarck, a 12-foot high bronze statue of Sakakawea and her baby son, Baptiste, stands at the entrance to the Heritage Center – the state’s largest museum.  The statue, created by Chicago sculpture Leonard Crunelle, depicts Sakakawea with her baby strapped to her back, looking westward toward the country she helped open on the Corp of Discovery.  The story of Sakakawea is fascinating and unique and it can now be explored through a new display and an online exhibit by the State Historical Society of North Dakota.

A special piece of that story surrounds newborn baby Jean Baptiste Charbonneau.  Today, February 11, marks the 206th birthday of Baptiste.  In the book “A Vast and Open Plain” edited by North Dakota’s own Clay Jenkinson, we find how Captain Meriwether Lewis documented the birth.

“about five oclock this evening one of the wives of Charbono was delivered of a fine boy. it is worthy of remark that this was the first child which this woman had boarn and as is common in such cases her labour was tedious and the pain violent; Mr. Jessome informed me that he had freequently administered a small portion of the rattle of a rattle-snake, which he assured me had never failed to produce the desired effect, that of hastening the birth of the child; having the rattle of a snake by me I gave it to him and he administered two rings of it to the woman broken in small pieces with the fingers and added to a small quantity of water. Whether this medicine was truly the cause or not I shall not undertake to determine, but I was informed that she had not taken it more than ten minutes before she brought forth”

It is not fully known if Baptiste (also nicknamed Pomp or Pompy by Lieutenant William Clark) was born at Fort Mandan, or nearby.  He remains the only infant to be a part of a major exploration and to ever be depicted on United States currency.  More about Sakakawea’s son is also online with the “Creating Sakakawea” exhibit.

A replica of the Sakakawea statue is also on display at the U.S. Capitol.

Posted by legendarynd on February 11, 2011 in Attractions, Events, History

And a great partnership sprang forward

I’m going to take you back to October 25, 1804.  The Lewis & Clark Expedition set out early under a gentle breeze, passing deserted villages of the Mandan before finally encountering several parties.  Corps member Gass wrote, “A great many of the natives, some on horseback and some on foot appeared on the hills on the north side, hallooing and singing.”

In the book, A Vast and Open Plain, editors note that the curiosity of the Mandans and Hidatsas were well known, and their apparent joy on the arrival of the Corps of Discovery was not unique.

The Corps found a place to bring boats to shore and camp, but it wasn’t until November 2, 1804 when the eventual location of Fort Mandan was chosen.  Today, visitors are welcome to tour reconstructed Fort Mandan and a beautiful Lewis and Clark Interpretive Center near Washburn – showcasing many unique artifacts and premiere history of the Lewis & Clark Expedition.

Posted by legendarynd on October 25, 2010 in Attractions, History

The majestic Lewis & Clark Riverboat has started their schedule of dinner cruises and weekend specials.  Board the Riverboat at the historic Port of Bismarck for a cruise along the mighty Missouri River.  Hear the history of the river and the journey of Meriwether Lewis and William Clark.  See the beautiful sights along the Missouri River – along with a peek of Fort Abraham Lincoln State Park.

The Lewis & Clark Riverboat often has specials – including the upcoming Memorial Day Celebration.  Military personnel, veterans and their families can ride free with a military ID.

Posted by legendarynd on May 19, 2010 in Attractions